Unlike the United States, in India, the Attorney-General does not have executive authority and is not a government minister; those functions are performed by the law minister.

Article 76 of Indian Constitution describes the appointment and functions of the Attorney- General. Under Article 76(1) The President shall appoint a person who is the citizen of India and is qualified to be appointed a Judge of the Supreme Court to be Attorney-General of India.

Under Article 76(2) the duties of the Attorney-General are described as follows:

Under Article 76(3) the Rights of the Attorney-General are described as follows:

Under Article 76(4) the Attorney-General shall hold office during the pleasure of the President i.e. no term is fixed in the Constitution. He receives such remuneration as the President may determine as no salary is fixed by the Constitution and is usually paid equal to the Judge of the Supreme Court of India.

The Attorneys General for India since Independence are listed below:

As the first and longest serving attorney general of India, MC Setalvad was in the thick of resolving the nation’s constitutional dilemmas. He appeared for the government in a host of important and, at times, controversial cases. He was also involved with the Radcliffe Tribunal for demarcation of the Indo-Pak border and several UN proceedings on Kashmir, assignments that required the deft touch of a legal eagle and the principles of a man of conviction. He chaired the first Law Commission of independent India, in which capacity he not just advised the government on crucial reforms and legislation but also created a framework for the Commissions future functioning. 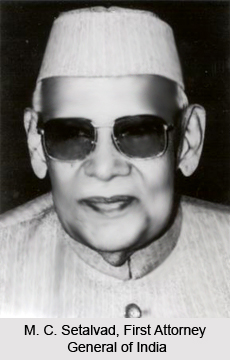 He was the Chief Legal Advisor of India in 1989 and then again during Atal Bihari Vajpayee government in the year 1998. He has had the rare distinction of holding the highest law posts under the Constitution besides being Additional Solicitor General and Solicitor General of India from 1977 to 1980. He has held several offices in organizations of national and international repute. Milon Kumar Banerji was an Indian jurist who was Attorney General of India from 1992 to 1996 and again from 2004 to 2009. He was also Solicitor General from 1986 to 1989. He died on 20 July 2010. Banerji, during his 50year career, had appeared in the Supreme Court and various High Courts and was associated with a number of important cases. During the Narasimha Rao government, the day he took over as the Attorney-General on November 24, 1992, he had appeared in the Ram Janambhoomi case and told the Supreme Court that the situation had reached a boiling point and any inaction would make it irreversible. The judgment in the case, upholding the validity of the Acquisition of Certain Areas in Ayodhya Act, 1993, was another landmark in his career. He had argued cases involving issues of Election Commission’s power and the citizenship of Congress president Sonia Gandhi. The 3 year tenure of the 14th Attorney-General of India Mukul Rohatgi ended on 18 June 2017 who was formally appointed by the President Pranab Mukherjee as with effect from 19 June 2014 a month after the Modi Government was elected. Mukul Rohatgi is a Senior Advocate at the Supreme Court of India. During Vajpayee Government, in 1999, he has also served as the Additional Solicitor General of India. Rohatgi, son of former Delhi High Court judge Justice Awadh Behari Rohatgi, has represented Gujarat government in the Supreme Court in the 2002 Gujarat riots and fake encounter death cases, including the Best Bakery and Zahira Sheikh cases. Besides some of these high-profile cases handled by him, Rohatgi had also appeared on behalf of big corporates in the 2G scam trial. As a corporate lawyer, Rohatgi had represented Anil Ambani in the Supreme Court in the gas dispute case between the Ambani brothers. He had also represented Italian embassy in the apex court after India arrested two Italian marines in 2012 for shooting dead two Kerala fishermen. During his 3 year stint, he has represented the centre in Supreme Court in many crucial cases including Triple Talaq matter, in which the judgement is reserved. He has argued many contentious matters like the challenge to The National Judicial Appointments Commission (NJAC) Act on the appointment of judges to the higher judiciary. He also defended the government, which was in a tussle with the Supreme Court Collegium of judges over the appointments. He has also advanced the government’s stand of defending the policy of Aadhaar, in which the issue of Right to Privacy has been raised and is pending before the apex court. As a top law officer, Rohatgi had defended the government’s policy of demonetisation. His tenure came to an end on 18 June 2017 and the Union Cabinet approved the extension of his term as the Attorney-General of India on 3 June 2017, until further notice.  He however had asked the Central Government not to consider him for reappointment or extension. A week later the notification of the extension of his tenure Rohatgi wrote to the government, stating his desire to discontinue as Attorney-General and return to private practice instead. He said that the extension given to him by the government earlier this month was adhoc till further orders, as it was done when Prime Minister Narendra Modi was on a visit to Russia. “So, the government has to take a call on my decision,” he said. This gave rise to various speculations regarding the successor of Mukul Rohatgi who will be appointed as the current Attorney-General of India.

According to the recent news KK Venugopal is likely to succeed Mukul Rohatgi as Attorney-General of India.  The 86-year-old looks set to return as a law officer after a gap of 40 years. Venugopal, who started appearing in the Supreme Court in the early 1960s, while based in erstwhile Madras, was designated as a senior advocate by the Supreme Court in 1972. Five years later, after the end of Emergency, he was invited by the Janata Party government led by Morarji Desai to become an additional solicitor general that warranted shifting base from Madras to Delhi.

What Venugopal will bring to the attorney general’s office is his unmatched experience of 50 years practice in the Supreme Court. He has seen the growth of litigation in the highest court and the inconvenience litigants from southern and northeastern states face in approaching the apex court for justice. A stickler for rules, Venugopal is often sought out by the Supreme Court when it faces tricky constitutional questions. He believes in hard work first and court craft later.

Venugopal, apart from being involved in many important cases before constitutional benches of the Supreme Court, spent more than six years as amicus curiae in the infamous 2G spectrum scam case relating to irregular allotment of bandwidth to telecom operators during the tenure of A. Raja as telecom minister in UPA-1. He assisted the Supreme Court in monitoring investigations by the CBI and the Enforcement Directorate.

MARRIAGE IS A LICENSE TO RAPE IN INDIA

LAW ARTICLES
Over the years, the patriarchy has dominated women in various ways not allowing them to exercise many rights, thus almost preventing them from having...

Tablighi Jamaat, Do Foreigners have the right to return to their...