Abortion, a method by which foetus in mother’s womb is eliminated. In a country like India, this practice may be termed as a taboo. But, its actually legal through a law termed as medical termination of pregnancy act 1971. Before 1971 abortion was illegal and punishable under IPC, but continuous growth in number of illegal abortions resulting in maternal mortality and morbidity, forced the Indian parliamentto introduce a new law for abortion. Still its quite difficult for a women to decide the future of her own body part (foetus). It’s so ironic that the one who has to carry the weight of baby till its birth has no right in the MTP act of 1971. The act has had various amendments, but still its not perfect yet. The law allowed registered medical practitioners to terminate pregnancy for socio-medical reasons, and also for the reasons of danger to mother’s health. The law spared women from inflicted and forced pregnancy. The Act was amended in 2002 and underwent changes like- abortion of the foetus could only be performed in government hospitals or places approved by the government, termination could be done only by registered medical practitioners, also punishment to the doers if abortion took place somewhere not approved by the government. If termination was required to be done of foetus <12 weeks, a single doctor’s agreement was required. Whereas to terminate foetus between 12 to 20 weeks old, consent of two doctors were required. Termination of pregnancy at any of the stages by a single doctor in good faith in necessary condition to save the life of mother was allowed etc. The current law based on the amendment made in 2014, forces women to justify the practitioners in good faith the reason for abortion which makes them completely dependent on the doctor. This makes unmarried women, sex workers vulnerable to exploitation. The amendment bill removed this barrier by recognising the need of unmarried women to for abortions. Also, if women demands abortion in the first trimester she can without justifying the cause or needs. .  Under the 1971 Act, Rape victims cannot abort after 20 weeks which forced them to move to the court of law. Earlier the law had the limitation to the gestational age i.e. foetus to be < 20 weeks. The law believed that abortion after 20 weeks has a big reason behind it and that is for female foeticide. Gender determination of a foetus can be done after 20 weeks and thus to prevent killings of female baby in mother’s womb the court has imposed restrictions on gestational age. But it is claimed by scientists that conclusive determination of foetal abnormality in most of the cases is only possible after 20th week of gestational age. After the amendment, gestational age has been increased from 20 to 24 weeks. But, scientist believe that brain feels some sort of pain only after 26 weeks, thus putting 24 weeks bar of gestation age is still incorrect. 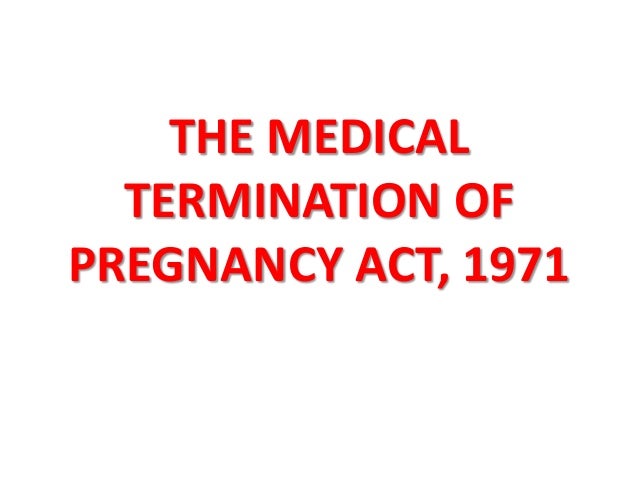 The Medical Termination of Pregnancy Act is a very disputed law as it involves rights of two – first, the mother and second, the foetus. Women can get abortion if the practitioner feels that there is a risk of life to the women, a threat to a women’s mental and physical health , or risk is there that the child will be born seriously handicapped. Also, in section (3) of the act it is stated that the length of pregnancy shall not apply to abort a foetus diagnosed with foetal abnormalities as may be prescribed. The law violates the fundamental rights article 19(right to freedom) and Article 21(right to protection of life and personal liberty) of a women. Right existing for the foetus is unclear as it is not a complete human body whose existence or right to life is being violated.

Disturbance, Disorder and Assault can never be a solution for bad...

LAW ARTICLES
This article has been written by Lakshay Bansal, a student of the Geeta Institute of Law. Introduction Human beings live in a community because of its...